Here’s some good news!  According to news reports  (and the one we saw was in the Pittsburgh City Paper)  the Pennsylvania Department of Environmental Protection says that 90 percent of Oil & Gas operations wastewater is recycled in Pennsylvania, and only 7 percent is disposed of in the method that is linked to induced seismicity. (earthquakes –  you know like Oklahoma has been experiencing …)

That is very good news to hear because everyone – all oil & gas, and industrial operations need to be recycling their water.  It’s so easy now – especially with IX Water’s OG system which can treat water for almost any contaminant of concern to mankind, and do it effectively (99.99% clean) and with a much bigger cost savings than traditional treatment, or trucking and injecting methods.

Here’s more from that story.  You can see the entire original piece, here.

When a 5.8 magnitude earthquake hit northern Virginia in 2011, the Pittsburgh area felt the tremors. It shook not only some Pittsburgh buildings, but some residents’ psyches. As far as many were concerned, earthquakes didn’t seem like something that could happen in Pittsburgh.

And while naturally occurring earthquakes in the United States are rare outside of the West Coast and Pacific states like Hawaii and Alaska, there are other kinds of earthquakes, referred to as “induced seismicity,” that regions far from fault lines are susceptible to.

Induced earthquakes refer to seismic activity caused by human activity, such as wastewater disposal (aka “produced water” disposal) related to natural-gas drilling (“fracking”). Shaking can result from the process of expelling high-pressure liquid deep into the earth’s surface. These induced seismicity earthquakes have been documented in Oklahoma and Ohio. The Pittsburgh area has experienced a high volume of fracking over the last several years, but has yet to experience any major induced seismicity earthquakes. And natural-gas drilling could likely increase thanks to the creation of the cracker plant in Beaver County, which will refine the gas extracted by fracking wells.

With natural earthquakes a rare possibility and a likely growing increase in fracking, what are the chances of Pittsburgh experiencing more tremors in the future? Thomas Pratt, a research geophysicist at the United States Geological Survey, says it is difficult to determine since the Pittsburgh region hasn’t been extensively studied, tectonically speaking. However, he says geologists don’t tend to rule things out.

According to a 2016 Canadian study published in the journal Science, fracking has been known to cause minor earthquakes. The USGS says that fracking itself is an extremely small player in induced seismicity, but the disposal of the wastewater deep into the ground (a by-product of fracking) is a more common cause for shaking.

Southwestern Pennsylvania has been extremely active in natural-gas drilling with thousands of wells drilled across the region over the years, especially concentrated in Washington and Greene counties. 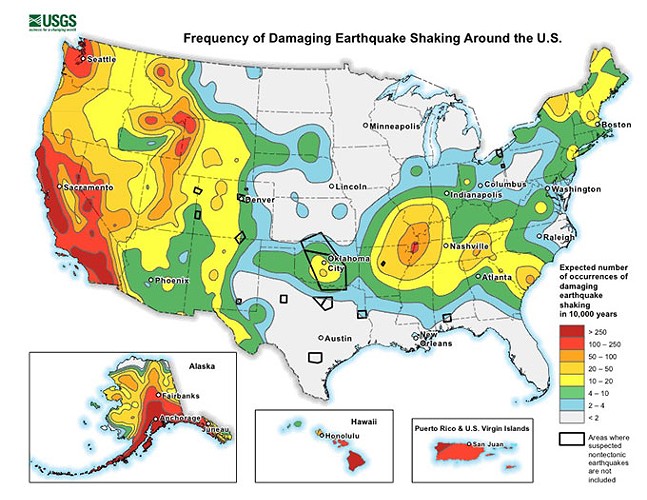 Studies have shown wastewater disposal is likely the culprit of the earthquakes there, as Oklahoma had a major fracking boom in the mid-2010s and disposed of most of its wastewater deep into the ground.