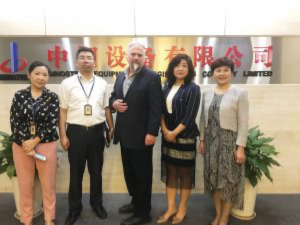 John “Grizz” Deal, the CEO of IX Power Clean Water based in Golden, is no stranger to China. He’s been travelling there for more than a decade to conduct business.

But on June 6 and 7, his travels served a different purpose — the US Department of Commerce selected him to represent American industry at the 2018 International Cleantech Summit at the Beijing International Convention Center.

The summit is organized by the China Ministry of Ecology and Environment with a purpose to “promote exchange and cooperation among national and international environmental protection companies, to provide technical support in improving environmental quality in China and to launch environmental campaigns against water, air, and soil pollution as requested by the central government.”

Deal gave two speeches at the summit. He spoke on the treatment of contaminated water in the oil and gas industry and on remediation of soil in oil and gas fields.

“It gave us an opportunity to be introduced to hundreds of influential people in the Chinese cleantech industries,” Deal said. In China, “there’s a greatest sense of urgency for new technology to help clean up the environment.”

What is IX Power Clean Water?

The IX Water OG is a machine that can remove harmful contaminants from produced water from oil and gas operations. The treatment system offers the least expensive solution for cleaning produced water, both onshore and offshore, either at the site of origination or at a centralized facility.

Why is it important to clean up the oil and gas industry’s produced water?

We have a finite amount of fresh water available to us. Only two percent of the global water is available for use by humans. Given that, we think it’s important to treat the oil and gas industry’s contaminated water rather than throw it away.

Why do business in China?

Second, China has a national directive to clean up the entire country — air, water, land — within the next five years. Because IX Power Clean Water is a global expert in treating the oil and gas industry’s contaminated water, it’s natural that we’d be doing business in China.

What is it like doing business as a small company in China?

See the story in the Golden Transcript: