The average American owns seven pairs and buys four new pairs every year. They are the most popular garment ever, aside from socks and underwear. At any point in time, anthropologists say half the world is wearing them. Five billion pairs are produced annually. And, on April 23, 2013, there were 1,134 workers killed and about 2,500 injured as they toiled to contribute to that 5 billion so we could each have our four new pairs a year.

What are they?  Jeans – blue, or otherwise colored. The Rana Plaza factory building collapse in Bangladesh in April of 2013 is perhaps the most famous manufacturing tragedy in the last fewyears, but it is not alone, and it is not the last. 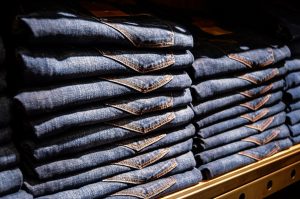 In offshore factories (outside the U.S.) and even onshore in places like Los Angeles, whistleblowers tell us that workers today – this very day – are locked in stiflingly hot, precariously-constructed buildings, breathing in toxic chemicals and fibers, working extra-long hours, denied breaks for food or the restroom, working on old, dangerous machinery for minimum wage or much less, and certainly no benefits. There is movement to demand industry change, but a lot of hazardous dye shops and manufacturing sweat shops still exist. Before you plunk down a credit card for a new pair of jeans, stop and think if you really need a new pair and if you want to contribute to the continued worker suffering.