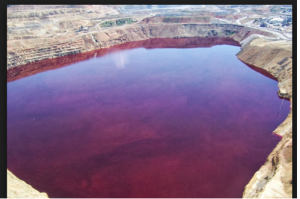 If you haven’t, the Berkeley Pit is located in Butte, MT. It has been a “superfund site,” since 1982, which means that it has been contaminated by hazardous waste and is considered a risk to both the environment and human health.

Berkeley Pit is the result of a few decades of mining of gold, silver, and copper. Put simply, mining produced water that was pumped away from the mine until 1982. Stopping pumping has resulted in a lake of approximately 40 billion gallons of highly acidic water containing calcium, magnesium, potassium, sodium, iron, manganese, aluminum, cadmium, copper, zing, chloride, fluoride, sulfate, and more.

In November, 1995, a blizzard resulted in hundreds of snow geese landing on Pit Lake to rest during migration. When the storm ended, observers found the carcasses of those geese, most with their gullets and gastrointestinal tracts eroded, showing how dangerous it is to drink the water. In order to approach the water, a 40-hour Hazmat program must be completed, and aluminum boats can’t be used on the lake because they’ll dissolve.

The water has been increasing over the last 30 years, to the tune of one foot per month. In June, 2018, the lake was measured at 5,347.24 feet. 5,410 feet is the Critical Level, at which contaminated water will begin to run into nearby aquifers and ground water in the Butte valley, where more than 30,000 people live.