How much water does it take to make that cheese burger 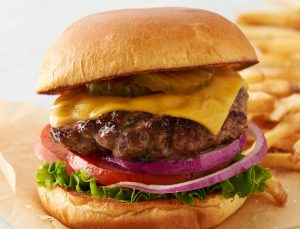 Awareness and Adaptation in the Animal Agriculture Industry

Many people nowadays are making a valid effort to reduce their water waste. People turn off the sink when brushing their teeth and take shorter showers. Doing this for a year might save 2,400 gallons of water. But there’s theres a small, and healthy, change you can make to save so much more. You can cut down on meat consumption.

This may seem unrelated but Dr. George Borgstrom, Chairman of Food Science and Human Nutrition Dept. of College of Agriculture and Natural Resources calculates it takes 1,800 – 2,500 gallons of water per pound of US beef. That is the same as a 7 minute shower every day of the year…  in one family dinner.

This is because a single cow can eat upwards of 150 pounds of feed per day, and drink up to 30 gallons per day. Dairy cows can require 40 gallons and even more food to produce their milk. The food they eat takes water to grow, process and transport it to the cow. (USDA Fact sheet 2016). When considering the amount of cattle and the time it takes to mature them, it is a lot of food and water used to obtain relatively limited quantities of beef products. The USDA estimates that “Animal agriculture water consumption ranges from 34-76 trillion gallons annually” making it a shocking 55% of the water consumption in the US. Furthermore in a UN environmental study titled “Risk Assessment…” it states “A farm with 2,500 dairy cows produces the same amount of waste as a city of 411,000 people.” and that is just one of the various animals in our diet.

The average person in America eats 270.8 pounds of meat per year; with a variety of the meats above, it could require anywhere from 126,734 gallons of water to 541,600 gallons of water (half a million) to keep this diet. And that is only one person for one year.

Historically, a rise in income leads to an increase in meat consumption (UN Food and Agricultural Organization) With the US and Europe having the highest quality of life than ever before they eat the most meat. Nathan Faila PhD in  Agriculture and Resource Economics found “The USA leads by far with over 322 grams of meat per person per day. This is twice as much as those in China, and 250 times as much as those in India” (Fiala, 3). As the number of consumers grow, increasing the industry, and available resources shrink, this will not be sustainable. Many environmental groups such as the FAO, World Bank and USDA, all concur that the production of meat today is seriously detrimental. Despite this, people continue to eat more and more meat, which in turn demands more and more water.

The UN projects there will be 34% more people in 2050 (UN Population Projections, 6). The Food and Agriculture Organization stated humans will “require a substantial increase of global food production” without having substantial availability of water. (FAO). With the current methods of food production, the World Bank predicts more people in countries that are already experiencing hunger and lack of clean water, which will result in more need for charities, donations and assistance.

If patterns continue as such there will be no way to make food available like it is now. There is no way to make more water and land, we must use what we have more effectively. Dr. Patrick O. Brown, Founder and Chief Executive Officer of “Impossible Foods” projects suggests “transitioning acreage currently dedicated to animal feed into protein crops that can be used directly for human consumption in the form of meat from plants”(Brown, 6). Doing this would keep people in developing countries employed as well as feeding a larger population. David Pimentel, professor of ecology in Cornell University calculates that if the food devoted to livestock went to humans, there would already be enough food to feed 10 billion people rather than 7 billion people and millions of livestock animals (Pimentel, 1-4). This seems like a much better solution than using water to make feed for animals when people face dehydration.

IX water has another solution not yet discussed: To filter water from elsewhere and use it twice. If we could water crops from things like washing machines, sinks, oil and gas, it would save inordinate amounts of fresh water from being used for livestock feed, and keep usable water from being disposed of. This adaptation to agriculture would negate water waste arguments and cause productive change. People could still eat things like burgers, and people would be using the most vital resource of our world more efficiently