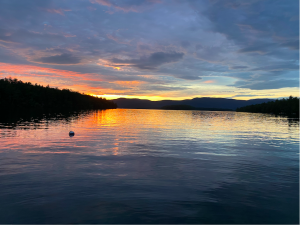 Squam Lake, found in the Lakes Region of New Hampshire, was formed by glacial activity. 20,000 years ago. During that time the Laurentide Ice Sheet covered most of North America. According to Encyclopedia Britannica, it covered more than five million square miles and was at least 10,000 feet thick in some areas.

Today, Squam Lake is home to a variety of animals, including loons, a pair of bald eagles, beaver, black bears, woodchucks, bats, and more — including a variety of fish that can be caught and eaten. In 2005 loons on Squam Lake were becoming less common after several years of breeding failures. The Loon Preservation Committee tested non-viable eggs and found high levels of contaminants like Polychlorinated Biphenyls (PCBs). Tests of tributary sediment then found high levels of PCBs and the insecticide DDT — a chemical that was banned in 1972. There have been high levels of mercury in the water for decades due to emissions from nearby coal fired power plants.

Recently, signs have been posted around Squam Lake advising very limited consumption of fish caught in the lake, due to high levels of PCBs. While these pollutants are not dangerous to people recreating in the water, they are affecting traditional life on this beautiful lake.

IXPower Clean Water has the ability to address the pollution in Squam Lake, and other lakes suffering the same kinds of pollution. It is incumbent upon us all to do what we can to protect our water.