Wildfires Impact our Water Too!

In many climates, summer means wildfire season. A wildfire is an uncontrolled, unwanted, and unplanned fire that burns a wildland area. Wildfires are accepted by scientists today as a natural part of many ecosystems, and have an important role in maintaining a balance within the system for all flora and fauna (Pausas and Keeley, 2019). However, as climate changes wildfires are becoming more severe and widespread due to drier seasons and longer summers (Bladon et al., 2014). This can have significant effects on the water storage, water cycle, and water quality of an area. Wildfires can change the environment by removing vegetation and changing water storage. Because the vegetation has all burned, the transpiration that would usually come from plants has decreased substantially. In addition, the plants can no longer store water themselves. 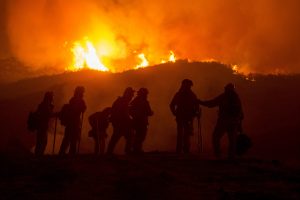 The lack of vegetation causes a greater exposure of soil, which then loses its water through evaporation. Wildfires can cause plant debris, sediment, and ash to enter rivers that lead to water drinking sources(Santin et al., 2015; Bladon et al., 2014). The increase of debris and sediment can clog waterways, reduce the lifetime of reservoirs, and bring contaminants to drinking water sources (USGS). The presence of ash can have numerous consequences by changing the soil cover and by bringing chemical contaminants into the water system. The chemical contaminants that result from wildfires vary greatly depending on the geology, vegetation, severity of the fire, and the timing of storms post-fire (Santin et al., 2015).

With that said, common contaminants include heavy metals, plant nutrients, and toxic chemicals that come from burned infrastructures. For example, a study on the 2002 Hayman Fire in Colorado found that post fire there were 2-2500 times the concentrations of arsenic, aluminum, cadmium, iron, lead, and mercury (Bladon et al.,2014). Phosphorus and nitrogen levels can also change due to fires, this can lead to an over-abundance of plant nutrients that can affect fish as well as cause harmful algal blooms (Check out: https://www.nsf.gov/discoveries/disc_summ.jsp?cntn_id=298181).

Lastly, when wildfires end up burning human-made infrastructures many more dangerous chemicals are released. For example, in California, benzene has been found in the water supply after a fire in Santa Rosa and the Camp Fire in Paradise. This was supposedly caused by the water system leaking, and then a vacuum-like system was induced that sucked all the burning fumes from the buildings back into the system contaminating the clean water. As the climate changes wildfires are becoming more severe and widespread due to drier seasons and longer summers (Bladon et al., 2014).  In the USA alone wildfires have doubled due to human-caused climate change.(Abatzoglou and Williams, 2016). This means our water quality is at stake and difficult decisions will need to be made.