Acid Rain Is Still A Thing 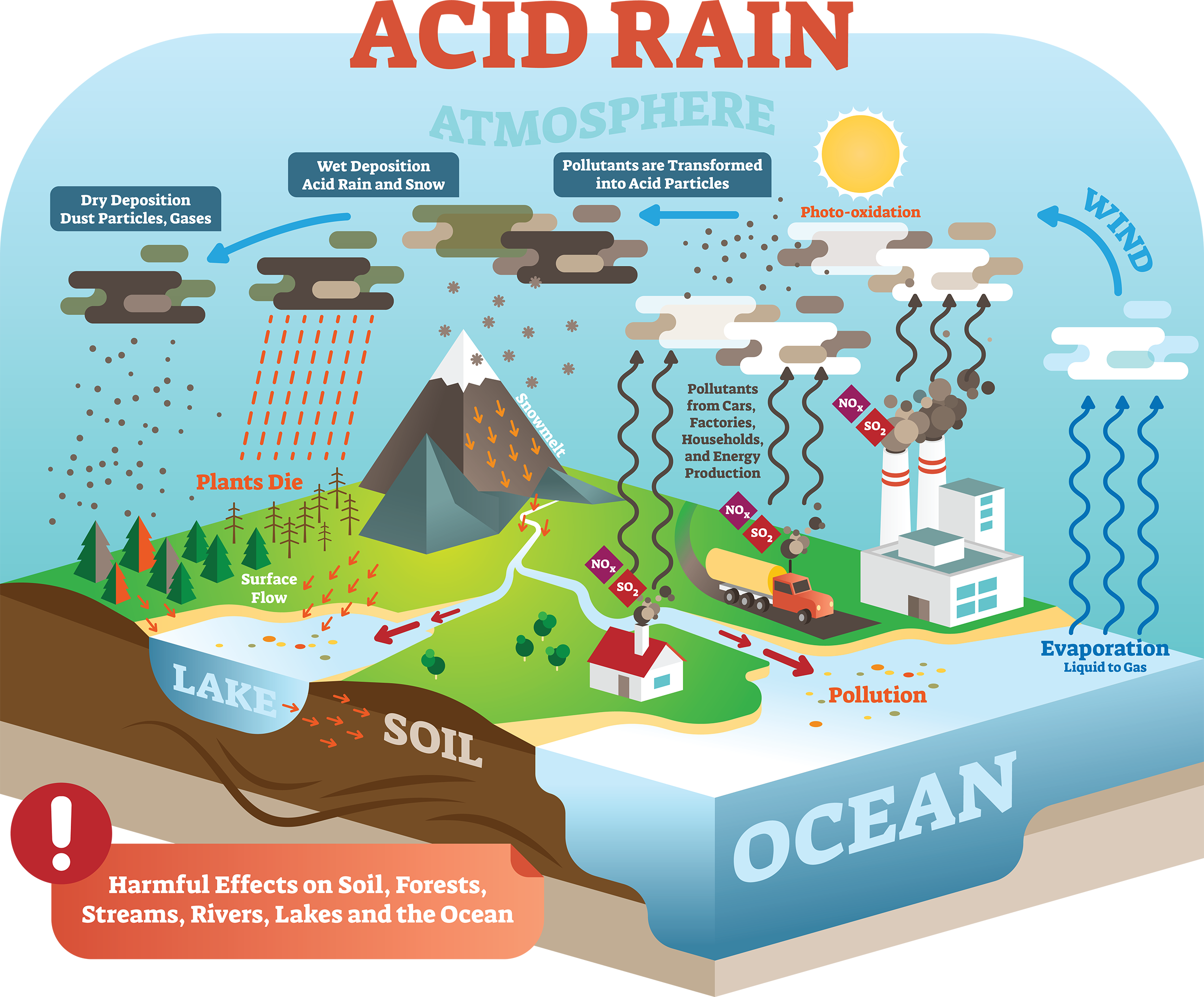 oxford.com defines the water cycle as,

The cycle of processes by which water circulates between the earth’s oceans, atmosphere, and land, involving precipitation as rain and snow, drainage in streams and rivers, and return to the atmosphere by evaporation and transpiration.

Acid rain is a result of sulfur dioxide and nitrogen oxides being released by various industries and combining in the air, then reacting with water, oxygen, and other chemicals in the atmosphere.

Without the addition of these pollutants, acid levels in rain normally fall between 5.0 to 5.5 on the pH scale, which is only slightly acidic. When combined with SO₂ and NOx, the acidity may increase as much as ten times, falling around 4.0 on the pH scale. The acid trapped in precipitation can only be neutralized by falling on alkaline surfaces like limestone (calcium carbonate.) Limestone makes up around 10 percent of the surface rocks on Earth. In some lucky areas, limestone is also part of the soil, so those areas are a part of the Earth’s ability to reduce the acid in rain and snow. Unfortunately, in areas that are not so fortunate to have limestone, acid rain can damage the environment.

Plants, fish, and waterlife, are negatively affected by acid rain. It has also been linked to decreased wildlife populations, dangerous lakes and streams, and human health hazards. It can damage plant leaves and stunt growth of plants. It has been shown to affect plants’ ability to deal with cold and disease. It even goes so far as to make the soil in which plants grow more acidic, which dissolves vital minerals.

For fish, acid rain disturbs levels of minerals naturally found in their bodies, which then affects their reproductive systems, causing females to be unable to produce eggs. In acidic waters, their gills may become sticky, and eventually be unable to take oxygen from the water. Acid rain also releases aluminum from soil. When it is introduced into water systems with fish, it makes the environment even less hospitable to aquatic life. Different forms of water-based species can withstand differing levels of acid. For example, frogs can survive a pH level of 4.0, while clams and snails can only handle a level of 6.0.

Since the 1970s and 1980s, there has been a reduction of acid rain in some areas, mainly Europe and North America. This is largely due to regulations meant to minimize its occurrence, like the U.S. Clean Air Act of 1970 and the Canada-United States Air Quality Agreement in 1991. The same is not true in areas where too many pollutants are being released, as in China and India. In those areas, acid rain is still affecting people, animals, and water sources.